Dear all (all who are left after the silence that lasted exactly one year today),

We are repatriating, and so I will no longer beat the tamtam from Singapore. I am not planning on continuing to blog from the Netherlands - it'll be crazy enough as it is, buying a house, finding a primary school, looking for a job. So this is goodbye.

We are going back because of family and schooling. It's been four and a half years, and I actually quite like my family, so it'll be nice to see them more often than once or twice a year.

As for schooling - Blondie is turning six this year, which means we have been looking at primary school options.

There is local school, which is very affordable, but a) we have no guarantuee of securing a place, and if we do, we have no guarantuee of the location of the place. It could be on the other side of the island. And b) our little Dutchie would from the start have to have two sets of tuition, both in Chinese and Dutch, and she'd have homework everyday and exams. I have discovered that I have a deep, primal resistance against the idea of my 6-year-old doing homework, exams and tuition. Which is to say, I can't get over it.

Then there is the Dutch school, which is utterly lovely, as it ought to be, for the price you're paying. We could, maybe, afford this for one child, but not for two. Which means we'd need to leave in two years anyway, when Big Boy hits the big 0-6.

In both cases, since we don't employ a helper anymore, when the children come home it ends my working day. This would be 1pm for a local school and 3pm for Dutch school, severely cutting into my working hours - and income. Not to mention school holidays.

So, there was the option of going back to fulltime employment to pay for a helper to look after the children so I could work in order to pay for the helper and the school, and I thought hang on. There is a country that has a school system I agree with (although it certainly doesn't get Singapore's results), where I have family to help me out, the opportunity to have a job within my field and part-time to boot.

So why not go there? 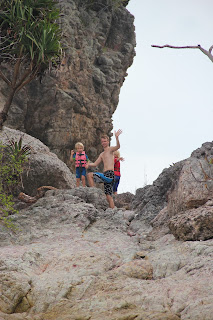 Things are not alive

Everybody is fine in our family, which is more than can be said for many other people and families we know and have come across the last few months.

Today I realized something. Something that has been nagging at me. See, I don't like to think of people, or relationships, getting cracks and breaks and fault lines. I like them perfect, perfectly healthy, perfectly happy, perfect in each and every respect.

And I realized that is because I equate cracks and breaks and fault lines with material things: things that break, tear and smash into smithereens. These things can be put together but will never be quite the same. Will never be quite as good.

What I realized today: people are not things. People are alive.

I have a scar on my thumb. I love that scar. I got it when I was sixteen and we had to disect a chicken in my biology class. Except the teacher had forgotten to get the chicken out of the freezer in time, so they were still frozen solid and the knife slipped and I cut my thumb instead and the girl in front of me turned around and screamed "It's still alive" when she saw the blood bubbling out of the carcass. But it was my blood bubbling into the carcass.

Because these are living things, and those can heal and grow. They are not determined by any single state of being, whereas material things are. They can be perfect. They can shine in museums, untouchable, unblemished, utter perfection.

Human beings can never be perfect.

Nothing more, nothing less. We get to live.
Gepost door Katrijn op 17:11 12 reacties

Labels: it's in English, Kaatjes kuren

Things that made me cry after I had children

I never used to cry. I tried sometimes, but it felt very fake. So I'd just stop and move on. It's not that I was never sad, but I just never teared up.

Then, pregnancy. Hormones. How times have changed!

This is when I realised something had changed:


This made me cry today (twice):


This made me cry with laughter (mostly at my idiot self - I definitely used to be one of the people who didn't know):


What makes you cry? I have a big box of Kleenex, so do share your videos :)

Announcement: We're off on holiday

we're going on another weekend break on a tropical island (don't we live the high life). I've just finished packing the bags, Blondie has finished packing her bags, I need to finish an article and then fold the laundry while watching Rock of Ages. (Yes. Again.)

All this to say, that I won't be finishing the NaBloPoMo as we will be on a wifi-less island. In fact, we may not have mobile coverage. But I hope that this month has brought me back into the swing of things, and I'll once again post according to my self-imposed schedule. I'm very happy that you guys are still around reading!

We'll be back on Sunday, hopefully tired and rested, feeling rosy and salty and smiling.

Big hug until then,

ps. I just finished a tiny post for tomorrow. But no promises after that.

Mama Monologue: Battles I have lost

"No Blondie, we are only going away for three nights, so you only need to pack three pyjama's."

"Big Boy, no jumping from the back of the couch to the tiles, stick to the rug."

"Big Boy, please spit out your food on your plate."

"No Blondie, you cannot have more broccoli, papa likes broccoli too."

"Big Boy, you may have the blue tiara and the pink necklace, let your sister have the sparkly one."

"No Blondie, we are not taking your Bumble Bee costume with us on holiday."
"Yes, I know I said to bring a nice dress but that is not a nice dress."
"Yes, it is nice."
"Yes, it is a dress."
"No, it's a costume."
"Bumble bees don't go on holiday."
"I know you're only pretending to be a bumble bee. We're still not packing the costume."
"No, we are not packing your Elsa dress either." 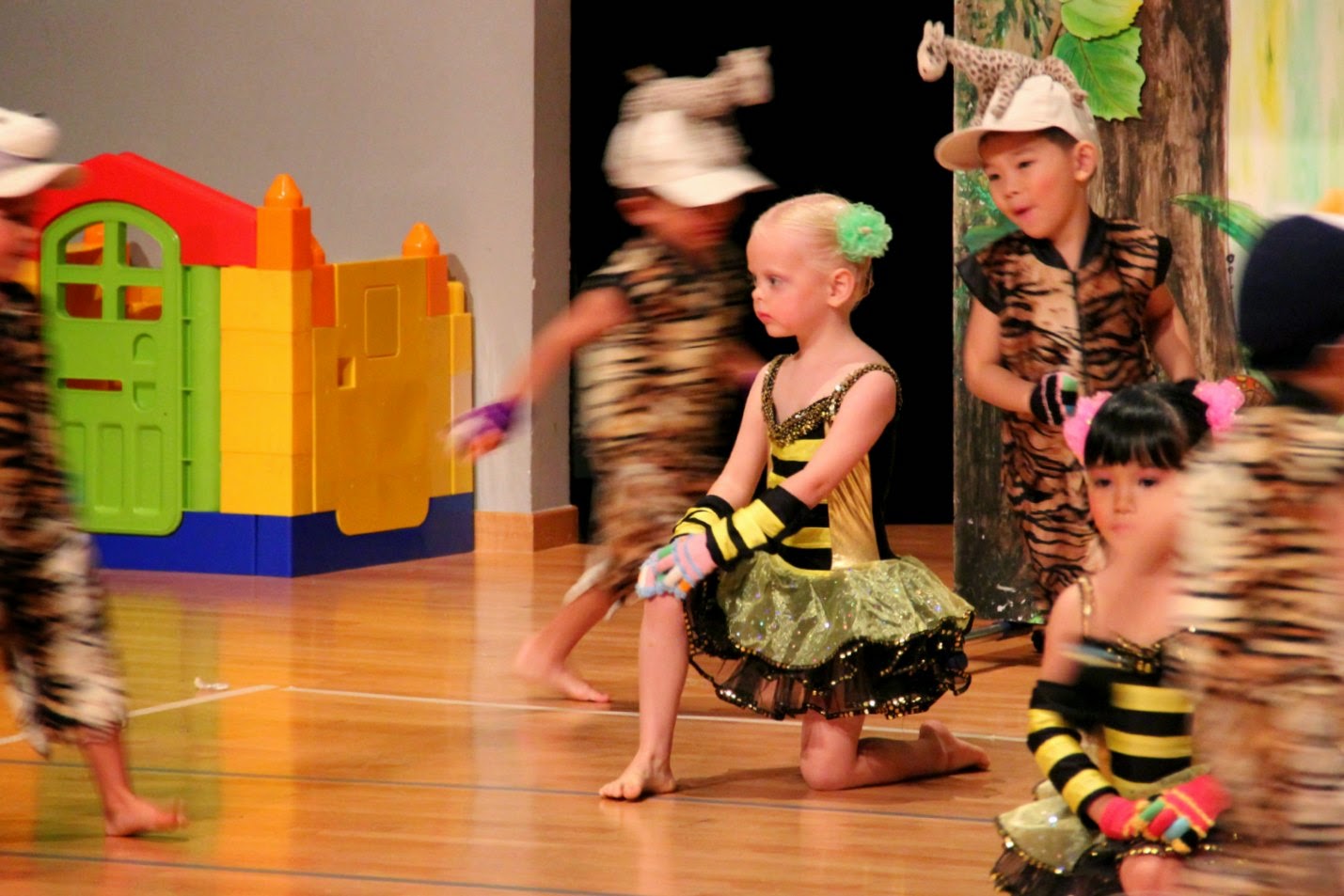 Today's post is not so much a lesson learned as a discovery made.

I am, even if I say so myself, rather good at packing bags for travel. Even when cycling from home to Rome carrying all the necessities on the back of our bicycles, I still had room to spare, and unworn clothes when we reached Rome (this was on purpose, as one needs to fare la bella figura in Italy).

For me, the trick turned out to be deciding what was essential (money, passport, phone, tooth brush and paste, deodorant and a spare set of underwear) and reminding myself that anything else could be bought upon arrival. Or even at the airport before leaving. I have not worried about packing since.

The discovery came after I had children: I still do not worry about packing. I was fully expecting to have to lug a household's worth of goods every time I decided to move myself two inches, but it turned out to be surprisingly easy. Grab the diaper bag. Grab the kid. Leave. (Now that the kids have to physically move themselves while wearing SHOES AND UNDERWEAR things are different. But that has nothing to do with packing bags.)

For longer haul travelling, I employ the same trick as before. I look up our destination, figure out what we absolutely need to survive, pack that, and relax.

Of course, I do a bit of packing after the essentials (in case you're interested: money, passport, phone, tooth brush, tooth paste, deodorant, spare set of underwear, two spare sets of clothing each for the children, diapers, sleeping bag and lovey for Big Boy). You know, like swim suits, swim goggles, some toys, a dress, a skirt here and there - I'm not setting myself up for a clothing hunt through a Bali tourist shop when we could be lying on the beach. I'm just saying, if it comes to that, we'll survive and it'll be an adventure.

My mother used to sigh and ask why I had to dress like a homeless person (this was the age of grunge) but it has left me with a underdeveloped sense of the importance of looking nice. This works out well when the goal is to pack 'n relax. (Except in Rome. Because when in Rome.)

In fact, once I showed up at an airport without a passport or an airplane ticket, and the Dutch Marechaussee very kindly issued me an emergency passport after which the airline people found my ticket in their reservation system and off I went on my holiday*. So arguably, the only thing you really need to pack is a tooth brush and clean underwear.

This Thursday we're off on to another tropical island and I have promised Blondie she could pack her own bag.


*It also involved making a police report, and included a healthy dose of panick, and a tiny airport located a 15 minute cycle from my house, and I strongly advise anybody against trying this themselves.

After Blondie was born, my mother handed me my own baby album. When we moved to Singapore, she slipped the first year of our lives in Singapore into my suitcase. It has been wonderful to compare Blondie's life with my own, and she loves to hear stories from when mama was little.

So, sometime over the past year, I have started to collect photographs of our wee ones to put into an album, so they can leaf through it. Since I was going through our files anyway, I have also started a file named 'Embarrassing', stocking pictures for use when the time comes for graduation and wedding speeches.

But here are a few of the past year that I just adore. 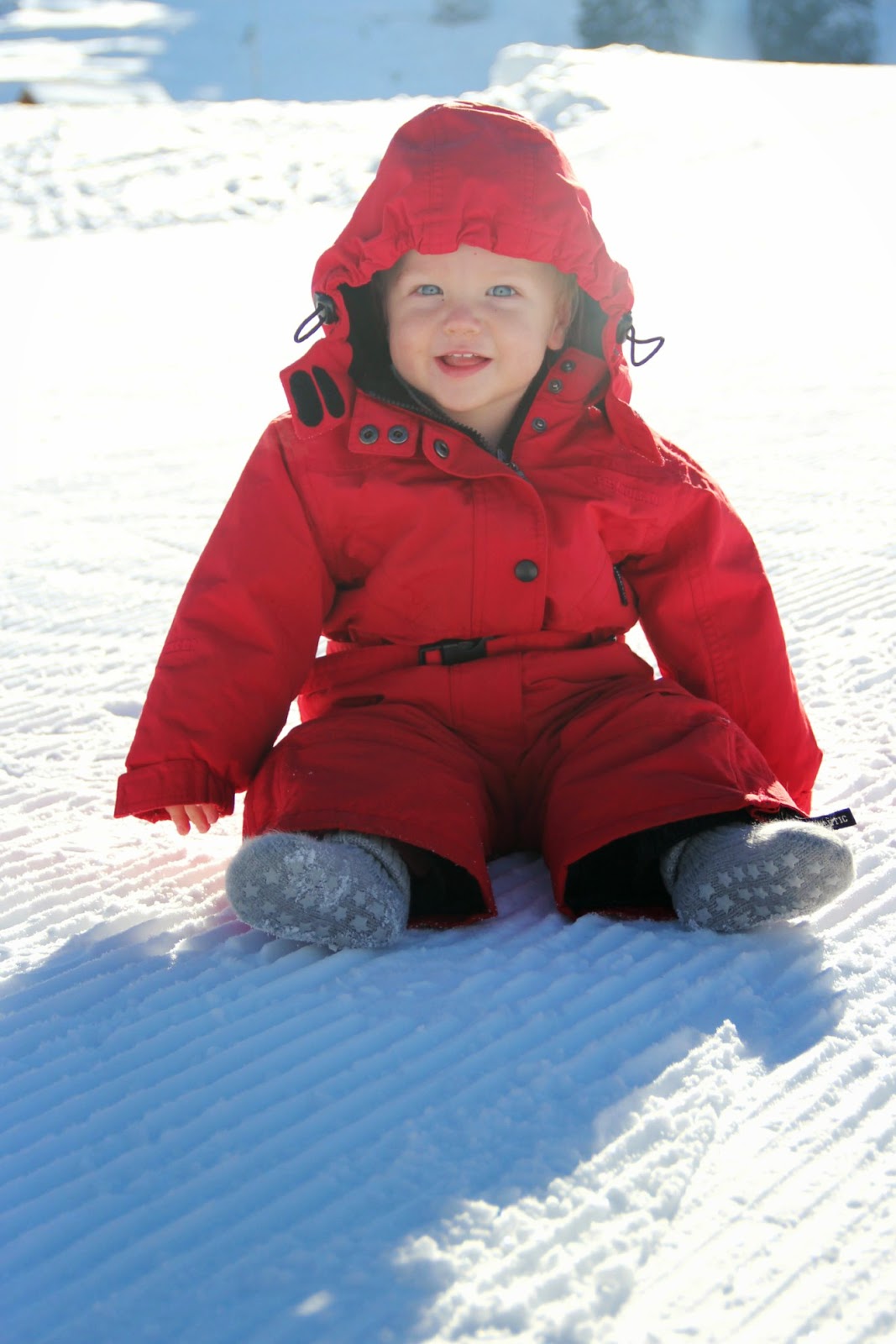 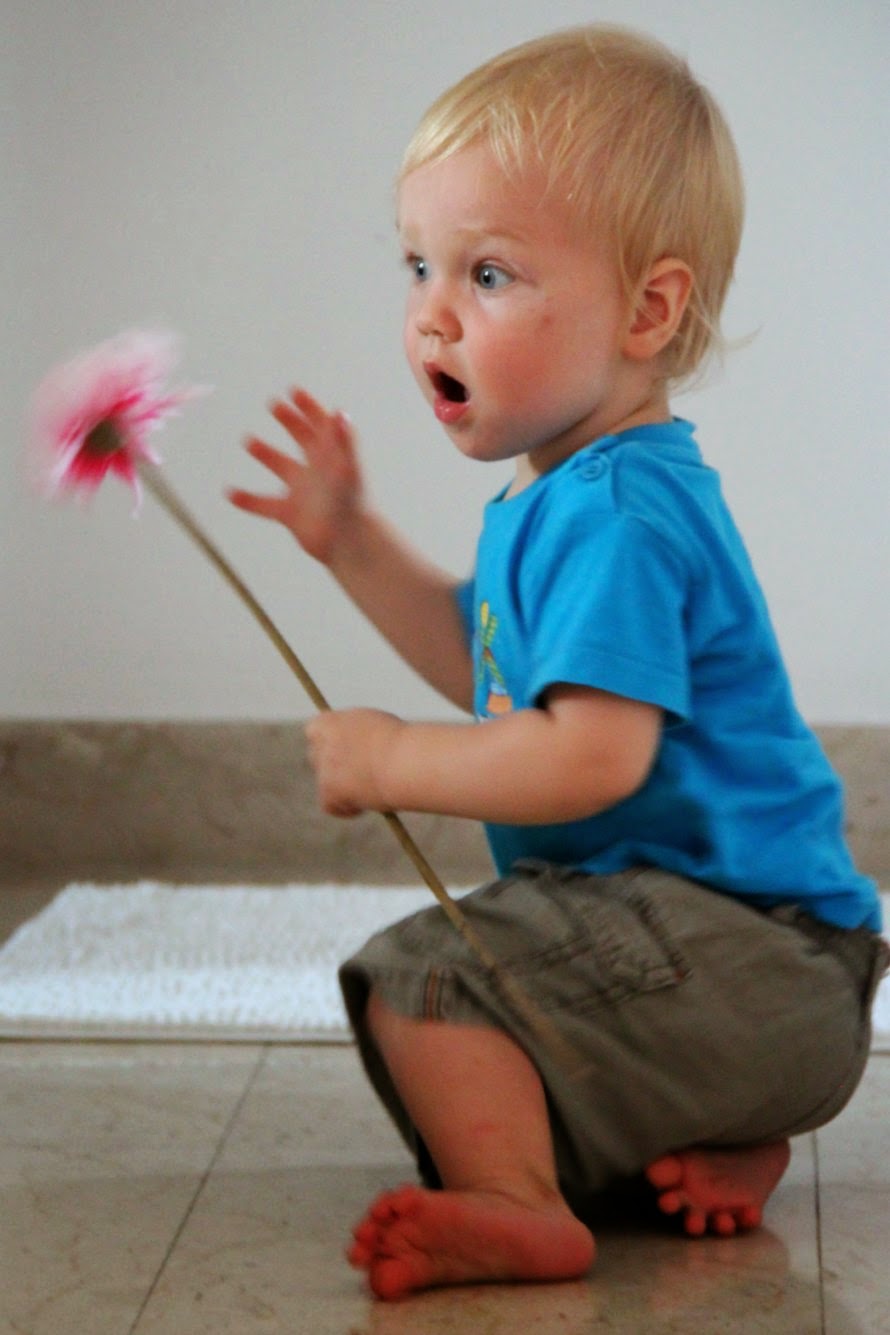 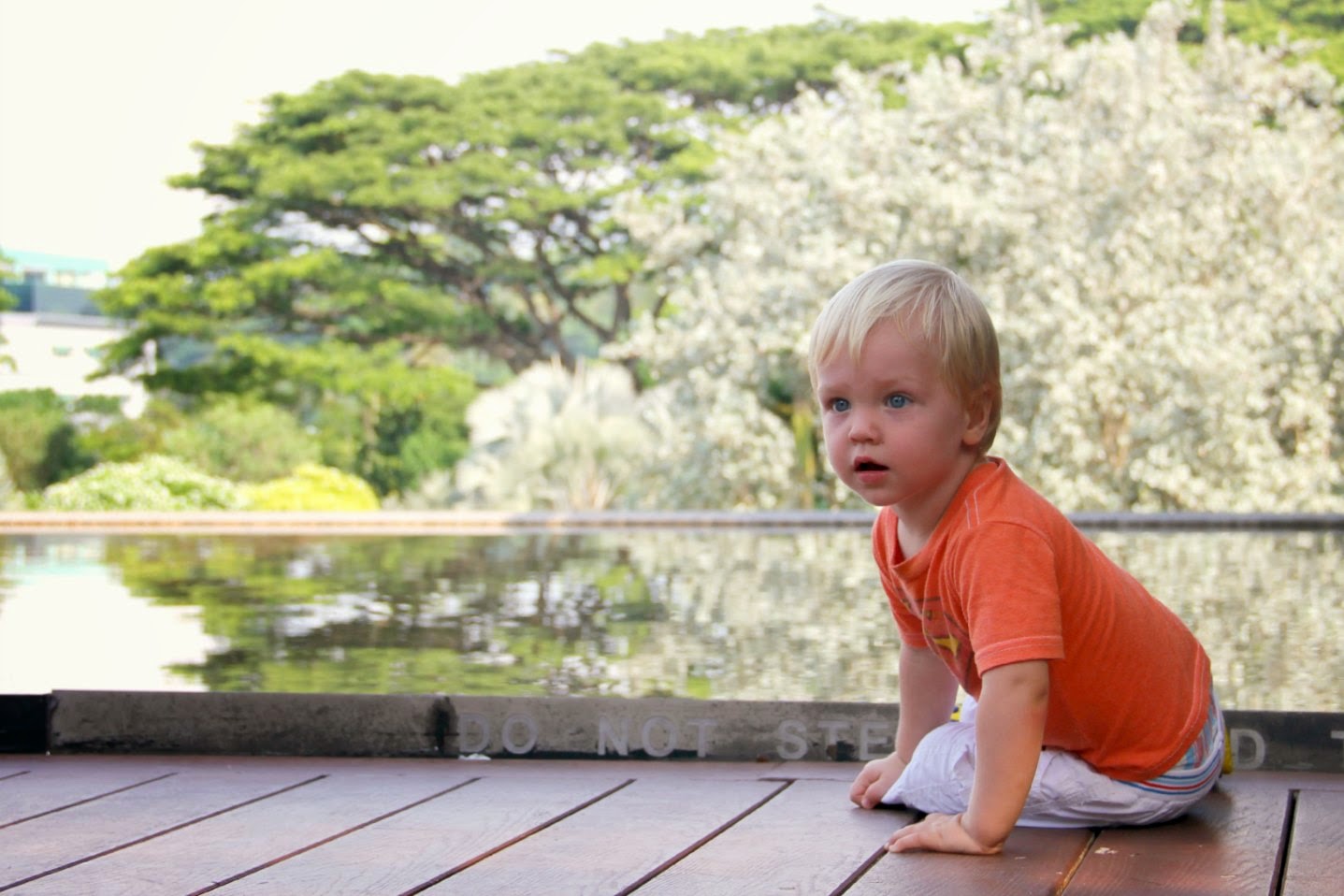 Photoshoot at my all-time favourite photoshoot location, the white garden at the HortPark.
(June 2014) 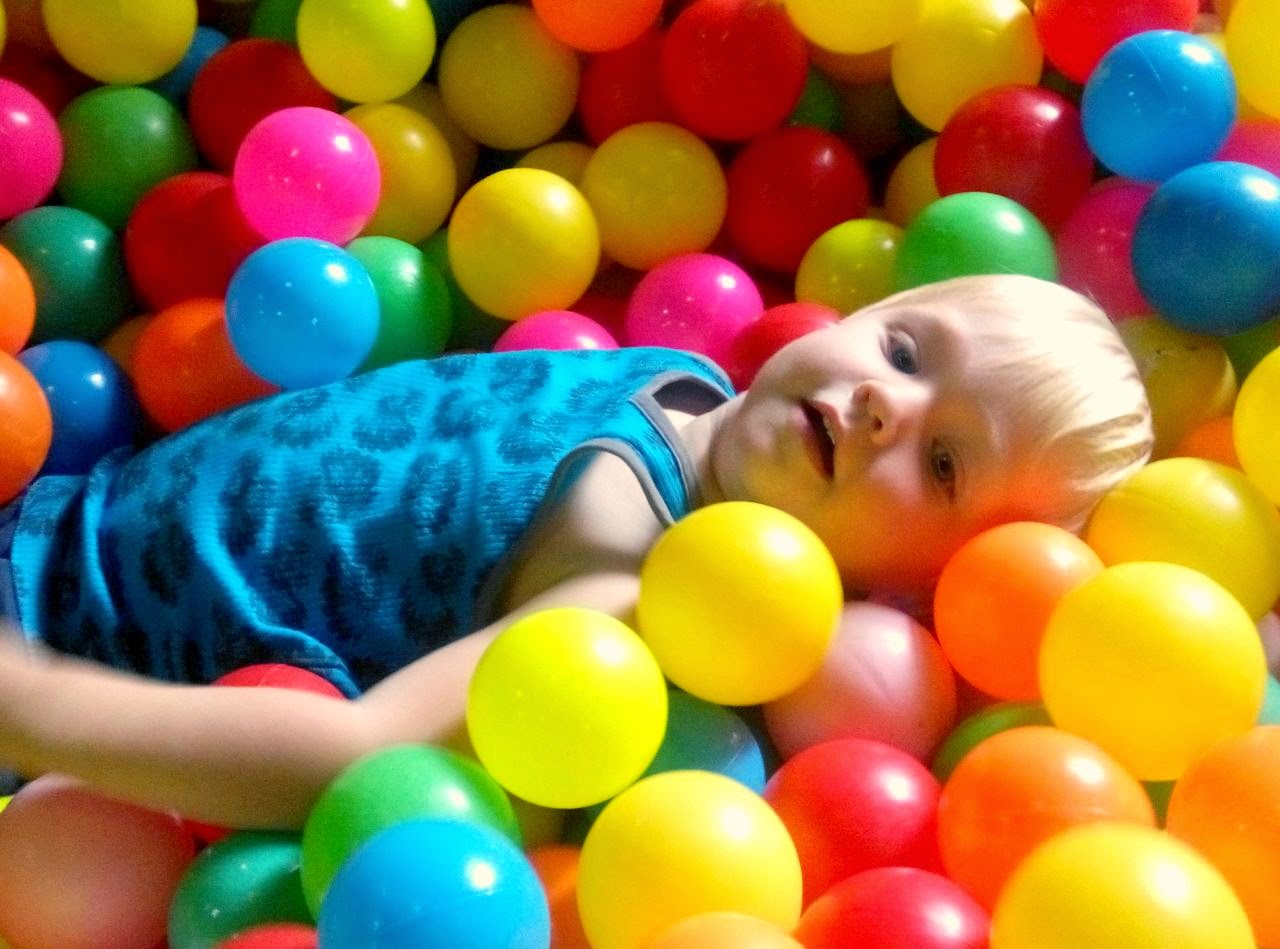 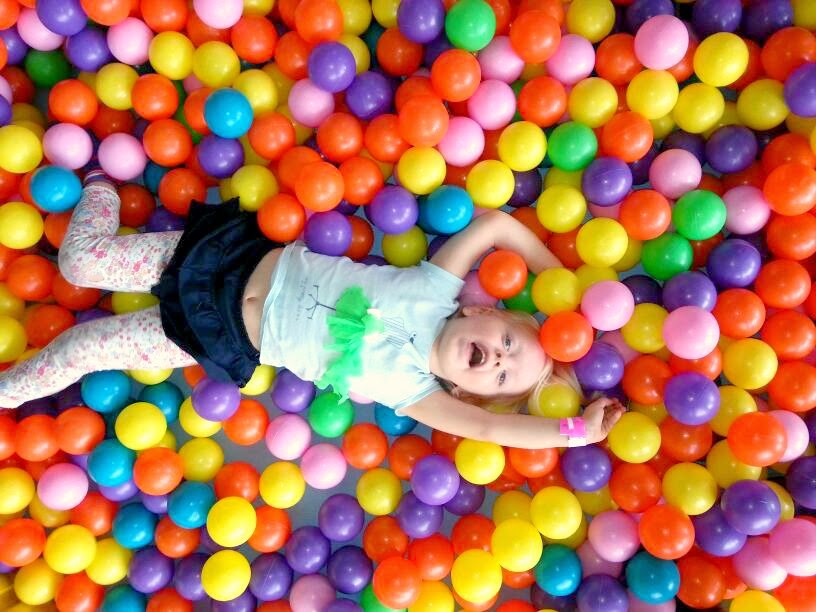 Blondie in the even bigger ball pen. (July 2014, picture by Man Tamtam) 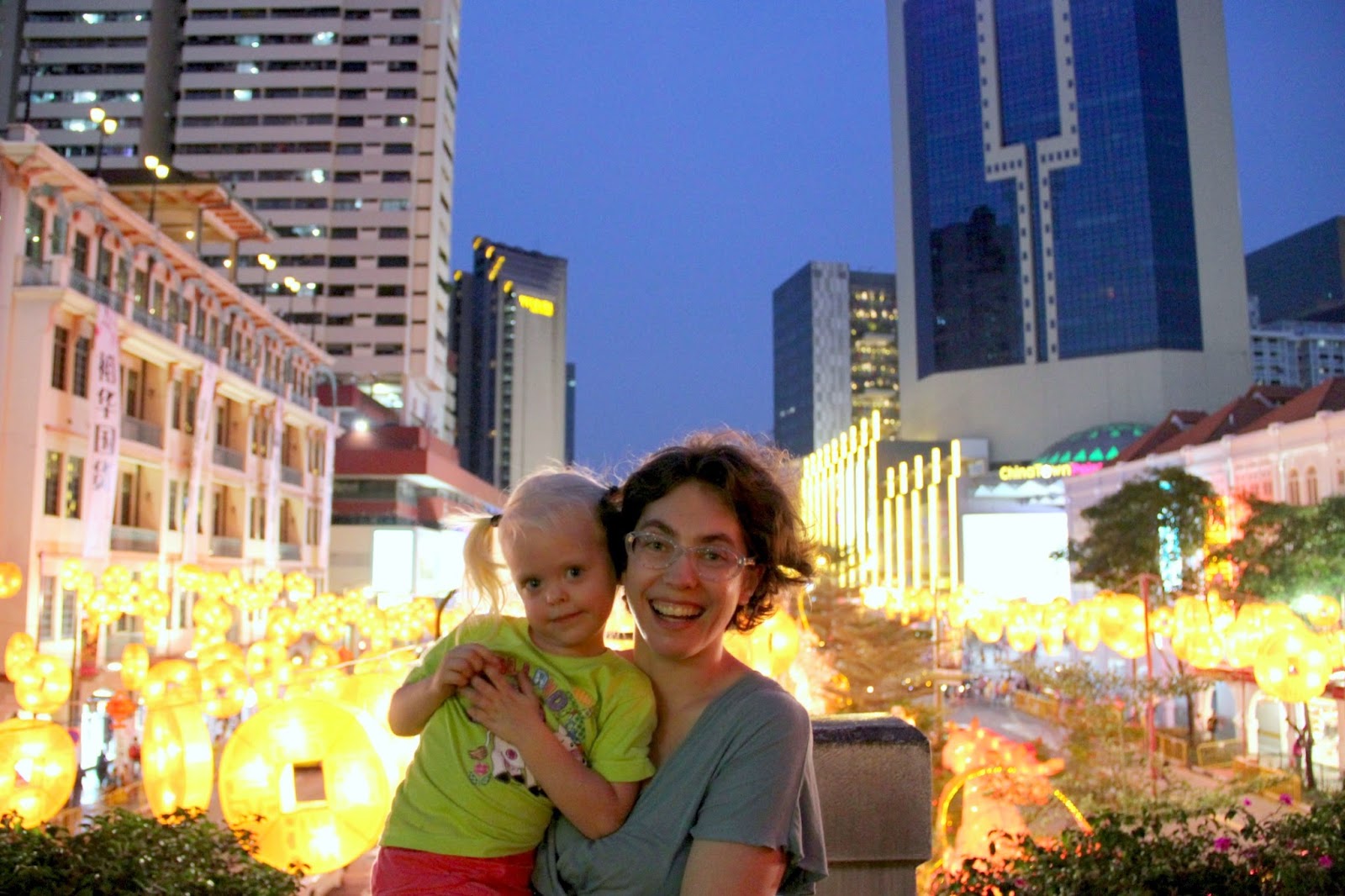 Blondie and myself at the CNY lights* (February 2014, picture by a friend)

*CNY is Chinese New Year, and the streets of Chinatown are covered in lanterns depicting the year's zodiac sign (horses and coins in this case, my zodiac sign in fact). 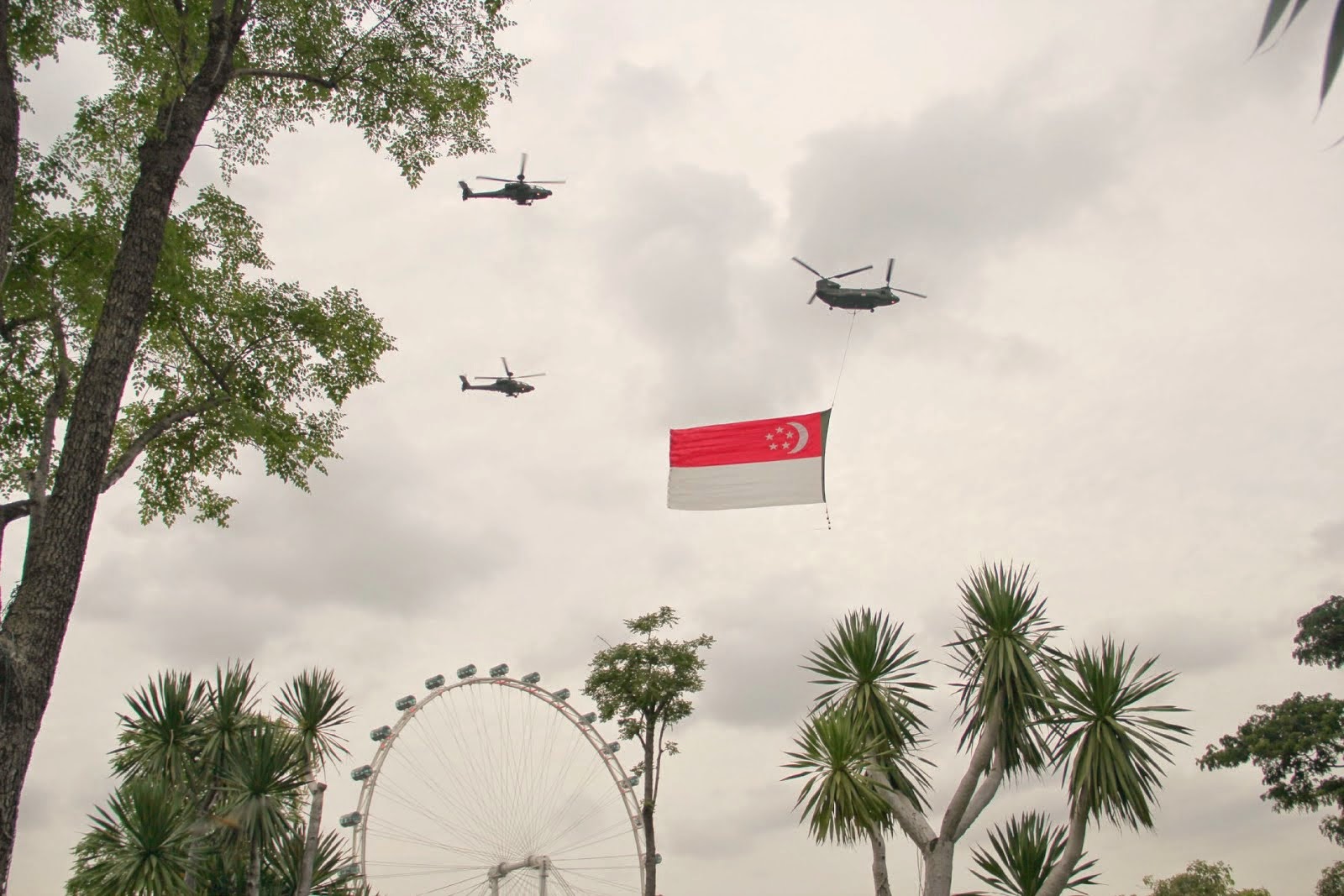 All text and images on this blog are protected by copyright and may not be used or reproduced without the specific permission of the author, Katrijn de Ronde.

The opinions expressed on the blog are those of Katrijn de Ronde exclusively. I strive not to let the highly developed marketing mechanisms of the commercial world influence me overly much.

This means that while I will attend publicity junkets and sometimes accept freebies (such as books for reviewing or tickets to movies for reviewing or information gathering purposes) I will strive to give you, my readers, my honest opinion.

I will not do advertorials, which is to say, I will not be paid (either in money or in freebies) to mention products or organisations in any post. There will be products and organisations and links in my posts - those will have been put there for free.
I will however write on assignment for any publication that is willing to have me. If so desired, I will bring my critical faculties on board as well. More on that here.
I also have no problem with outright advertising. Feel free to contact me about banners, advertisements and the like.
You can find my views on publicity and sponsorship in more detail here.